Today is October 25, 2018 and I am choosing to write this article today because of the amount of “falling” the market has done so far this month.  Not sure I will get it published by the end of the day … but as I listen to Fox Business News on my other screen I will give it a try.

Mark Twain (aka Samuel Clemons) the writer of Tom Sawyer and Huckleberry Finn was credited with saying, “October:  This is one of the peculiarly dangerous months to speculate in stocks.  The others are July, January, September, April, November, May, March, June, December, August, and February.”  Now I don’t know why he listed them in that order … but he did.  He also said, “The secret of getting ahead is getting started.”  And he also said – and I truly do believe – “If you don’t read the news paper you are uninformed, if you do read the newspaper you are misinformed.”  The same can be said about what you hear on the TV – even though I am listening to it as I write this.

There is one side that thinks things are terrible and that the market is moving into Bear Market Territory … and the other side that says this is nothing more than a “correction” that all bull markets need.

What is a bear market?

A bear market is a condition in which securities prices fall and widespread pessimism causes the stock market’s downward spiral to be self-sustaining.  Investors anticipate losses as pessimism and selling increases.

Some will tell you that a poor economy will lead to a bear market.  Is this true?

What is a bull market?

This is a period that often leads to overvalue of stocks as the investors are highly optimistic and believes the stock will always go up.

Some will tell you that a good economy will lead to a bull market.  Is this true?

The use of Bull and Bear comes from the way animals attack their opponents.  A bull thrusts its horns into the air, while a bear swipes its paws downward.

The economy IS NOT the stock market!

Above I asked two questions …

While the economy could lead to either … it is not necessarily true.  Look at it this way.

From 2008 through 2016 we literally had a terrible economy … very high unemployment rates, very low interest rates and inflation rates, a terrible trade imbalance with countries overseas, taxes (corporate and individual) were rising, companies were moving operations out of America … and what did the markets do?

So on average … during a terrible economy the markets as measured by the big three indices rose an average of 168.33% over an 8 year period.

Since January 2017 everyone keeps telling us the economy is improving.  Unemployment is at is lowest point in the last 50 years (and in some areas at the lowest point in history of record keeping), interest rates are starting to rise along with inflation slightly, trade imbalances are shrinking, American companies are coming back to America, and individual and corporate income taxes are reducing.

What did the markets do over the past two years?

So on average … during a pretty good economic period the markets as measured by the big three indices rose an average of 37.79%% over a 1 year and 9 month period.

I’ve often told my clients over the years that while the economy can influence the markets … the markets are not solely controlled by the economy.  You see, the economy is driven by hard fundamentals.  This would be things like Gross Domestic Product (GDP), Trade with foreign countries, Monetary Policy of the Federal Reserve (aka Interest Rates), Inflation, Employment or Unemployment, Corporate Profits, etc.

While the economy can influence the markets, what really drives them are emotions … two in particular:  Fear and Greed!

So what has happened this month?

Let’s take a look at three charts, then we will look at the numbers for the charts.  These charts will show the price of the index (Green Mountain), the 50 Day Weighted Moving Average Price (Blue Line) and the 200 Day Weighted Moving Average Price (Red Line), and a dotted line showing the drop from the all time high (which did occur in the past three months) to the recent low for this three month period. 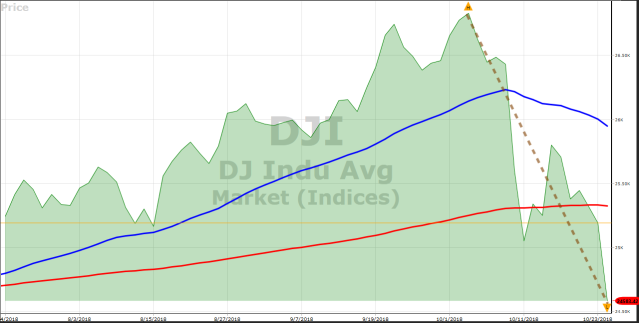 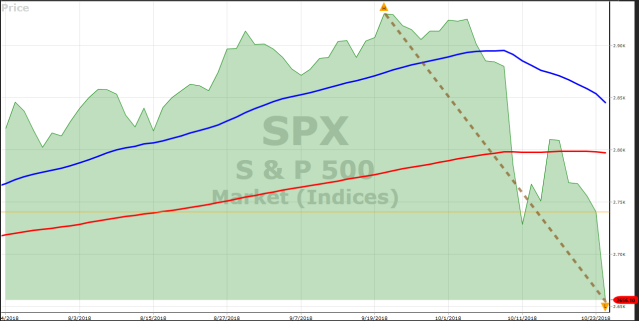 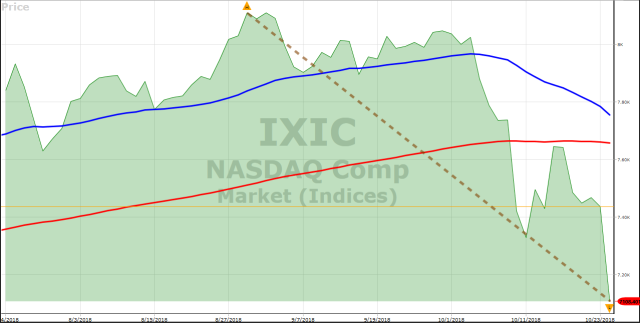 Correction vs Bear Market (by the numbers): 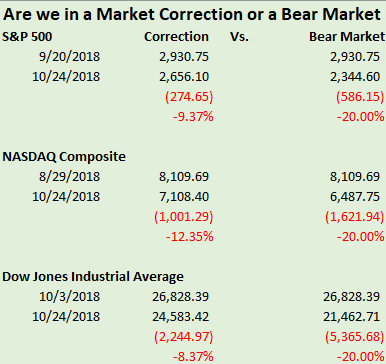 We’ve been told time and time again that a Bear Market will begin when and if the price of the index falls from it’s recent high by 20% or more.

So, far, we have nothing more that a Market Correction – which is good for Bull Markets.  The DOW has corrected by 8%, the S&P by 9% and the NASDAQ by 12% as of close of business yesterday.

Could it happen?  Yes.  Is it likely to happen?  I don’t think so.  I think currently there is a lot of FEAR in the markets with the so called trade wars between the US and China and the upcoming Mid-term Elections, but I also think “these too, shall pass” and the markets will start to trend higher again.

Now would be a good time, however, to start putting together a shopping list – if you like to do your own research.  Or, if you just want to be a prudent investor, consider investing in one or more Index Funds (Exchange Traded Funds – ETFs).

Some of the index funds you could consider would be as follows:

Of course you will want to discuss this with your financial advisor before leaping in … and you should wait until we have a true up market trend before getting in.  However, had you invested $45,000 (about $9,000 in each of these funds) back in 2009, this is how they could have performed (NOTE:  I used IVV the iShares S&P 500 Fund here rather than SPY … but they are about the same):

Even with the ups and downs … I don’t think any of you would be real mad for investing $45,000 and nine years later having it worth $150,000.  It should be also noted that this system I use does not track dividends.  By reinvesting dividends over this 9 year period – since all funds here provide dividends – your profits would be a lot greater than is shown.

In Closing, here’s a look at the Dow Jones Industrial Average by the minute this week:

SATBIYTC = Stick Around The Best Is Yet To Come!  Thought I’d tell ya before you drove yourselves crazy trying to figure it out.

3 thoughts on “October, the month of the BIG DIP”