I looked at my family investments at the end of the day on Monday May 13th and saw that they were down a little more than $40,000 for the day (remember I do a lot of options investing which is a lot more volatile than simply stock investing). Everybody in the media – and family – were screaming, “Get out of the market, get out of the market, Sell in May and Go Away!”  All the while I was thinking … “Just another day of opportunity for those that are on the sidelines with cash.”

Look at this graphic:

This is the Dow Jones Industrial Average.  The yellow lines separate the days.  Last Friday, Monday, Tuesday, Wednesday and today.  This volatility is being caused by the so-called Trade War Donald Trump has started with China.  Let us not forget that China has been taking advantage of America for more than 20 years and President Trump knows that the Chinese will only respond to strong talk and not the Pollyanna soft-talk of so many presidents that came before him.  China, in other words, loves a challenge.  They always want to know if their “Kung-Fu” is better than the rest.  Mr. Trump just happens to be one who will put them to the test.  If there were a financial Bruce Lee, it would have to be him. 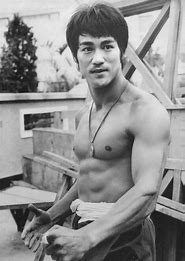 For some of the younger people who may not know who Bruce Lee was.  While he was an American Actor … he was known as the King of Kung-Fu.

Look longer-term and get rid of Market Shock!

How do these past few weeks look since the outset of this new round of talks look on the longer side of the scale?  Look at this chart that covers the period in the Dow Jones from December 6, 2018 to today at 10:00 AM: 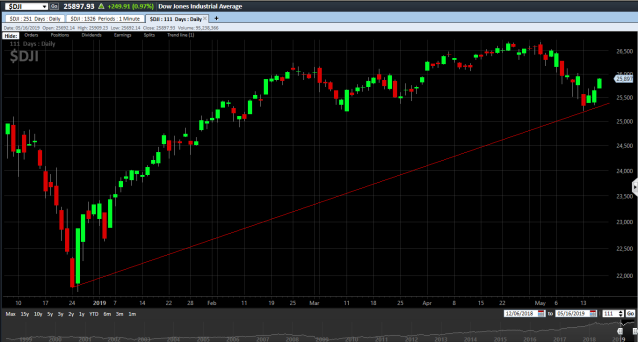 You will notice in this one I have drawn a “Trend Line” from the December 24th low to the Monday, May 13, 2019 low.  Which way is the trend?  Is it going up or down?  and look at the last three days.  Have I not always said, “Make the Trend your Friend?”

There is absolutely no reason to get out of the market for one down day (even if you are retired like me) and even though the market falls by 700 points on that particular day.  Why turn an UNREALIZED loss into a REALIZED loss?  It seems funny to me that we charge 25% on $200 billion (that’s $50 Billion in added revenue to the government) and the Chinese charge 25% on $60 billion (that’s $15 Billion in lost revenue) and this shaves $1.3 Trillion off of market value.  Crazy … just Crazy.

Like I’ve been telling family and anyone else that would listen … this so-called trade war is a good thing.  It is not going to cost Americans that much and it will cost them far less than it would cost the Chinese.

Yes a Tariff is a tax.  Trump has raised taxes on Chinese Business.  It is amazing to me (and another writer I will introduce later) that the liberal left media got down on Trump for lowering taxes for American Tax Payers … and now they are blasting him for raising taxes — just a little bit — on Chinese businesses (and American Businesses that have anything to do with manufacturing in China).

Folks … it is not going to be bad for us.  Please don’t stop listening to the Liberal Left Media but please stop believing everything you hear from them.  Take a look at this ARTICLE I found on MarketWatch.com as I think Brett Arends (who is not a Trump Fan) will make it abundantly clear to you that you cannot trust most of what you hear from the left on this issue.  Either they are flat out lying to you or they simply do not understand finance.  You decide!

In closing I will tell you that in the past three days my family accounts have grown by $38,718 as of right now … so we are within about $1,300 of the amount we were down on Monday’s close of business.  Had I sold everything and jumped back in today … I would be paying a higher price for many of the holdings than I would have sold them for on Monday.  That would be like buying high and selling low … not the ideal way to invest.

Moral of this story:  You can’t time the market … don’t even try.

Have a great day!  Think I will head to the golf course.