My name is Kylie Nix and I am currently a junior at Northwestern State University! I am studying Criminal Justice and hope to use my degree to enter the forensics field or work my way up the system to the FBI! I have been interested in law enforcement since I was a young girl and I’m excited to pursue my dream! I hope y’all enjoy the paper and thanks for taking the time to read it!

In this research paper I will compare the Norwegian prison system to the prison system here in the United States. The United States’ prison system and Norway’s prison system is on opposite ends of the spectrum when it comes to recidivism rates, incarceration rates, the way they treat their prisoners, and many more. Throughout the paper I will discuss the layout of the prisons, the sentencing differences in their prisons, whether the prisons main focus is on rehabilitating prisoners or just punishing them, and the way their prisoners are being treated in their facilities. This paper will also break down each countries prison process in order to examine how their systems work, discuss which aspects of each system is producing the most positive results, which aspects of the system needs to be changed, and ultimately come to a conclusion on which system is more productive and what we or Norway can do to produce better results.

COMPARING NORWAY’S SYSTEM TO THE U.S.

Norway is well known for their success in rehabilitating offenders and keeping them out of prison once they are released. Whereas the system in the United States is constantly being told that their system is broken, and the statistics are proof of just how broken the system really is. The most prominent statistic that clearly shows the success in Norway and the failure in the United States is the recidivism rates of both countries. According to an article written by Laura Paddison, and published by HuffPost, “Recidivism rates in Norway are among the world’s lowest. Around 20% of those released from prison are arrested within two years. In the U.S., about 68% of released prisoners were arrested within three years.”  That statistic alone shows that there is something Norway is doing right to produce these results. This paper is going to break down each system in order for us to pinpoint exactly what went disarray with the system in the United States and how we can change that system for the good with the help of Norway’s ideals. To have an understanding of these two countries correctional systems one must first understand completely how each system works and the values the systems are reliant on. To begin, I will compare each countries purpose of punishment, the sentencing procedures, how the prisoners are treated, and the layout and design of the prisons. After the reader has a full understanding of how both these systems work in each country, I will explain from a critical view of why we can’t simply “copy” Norway’s system in the U.S. and will give possible solutions on how we can still change the system in the United States for the greater good.

Each country has their own purposes of punishment, and this is where the main difference between Norway and the United States begins. Both of these countries began their system with a focus on rehabilitation.  However, as time went on, each system slowly began to shape into the correctional system that is in place today.  According to Emily Labutta’s article, “The Prisoner as One of Us”, Norway’s penal system focused mainly on rehabilitation and then later, in 1998, Norway began to incorporate reintegration into their mission as a prison system. “The Norwegian view of punishment is that the restriction of liberty is the punishment…”  The U.S. however did not make this positive change to their system, and instead, went in the opposite direction focusing mainly on deterrence, incapacitation, and retribution as their main goal. The differences in their goals for punishment is a great explanation on why Norway has such an unorthodox, and sometimes seen as unfair, sentencing structure. The United States is well-known for their harsh sentences, whereas Norway is known for just the opposite. “In 1981, around the same time that the United States was implementing the Sentencing Reform Act, Norway abolished the life sentence and replaced it with a twenty-one-year maximum sentence. It is apparent that as time passed, Norway became more lenient on sentencing and the United States became tougher. Ironically enough however, the statistics shows that leniency is working for Norway and that our strict sentences here in the United States are not yielding any positive results.

The way the prisoners are treated in each country and the layout of the prisons that inhabit that country is a big hint as to why the recidivism and incarceration rate is so high in the United States. Every prison in Norway focuses on the rehabilitation of inmates by making their prisoners “better neighbors” when they are released. Donna Virgilio Mattia is a parole agent that participated in the study done in Laura Paddison’s article, and she claimed that Norway’s prisons are “like Disney World” compared to our prisons here in the U.S.  Jerry Metcalf, a prisoner in the United States, kept a journal and documented his activities throughout his day to show his readers what life is like in prison:

Safely back in my housing unit, I mark my place in line for a shower (there’s just one) by dropping my towel and soap dish outside the stall. I then fix myself a bowl of instant oatmeal using our hot water dispenser, stir in a spoonful of peanut butter, a handful of cashews, almonds, and sunflower seeds, mix a cup of milk (powdered), dig a few bananas out of my locker (purchased on the black market), then sit down to enjoy lunch as I await my turn to bathe. (Metcalf, 2018)

That, believe it or not, is a better meal than what is served in the cafeterias in the prisons. Now, as for Norway, “…small groups of prisoners get together to cook and eat their meals. With the full range of silverware and cutlery that can’t be found inside prison walls anywhere else.” It is unbelievable that Norway trusts their prisoners with cutlery that can cause major harm to another inmate whilst the prisons here in the U.S. don’t even trust their inmates with bananas, forcing them to purchase them off the “black market”. The layout of prisons in the United States is best depicted as grey walls, long halls, communal bathrooms, and many cells along the walls containing prisoners that are barely wide enough to allow one person to move freely, much less two. This is a drastic change compared to the interior of Norway’s prisons and cells which “look more like dorm rooms… giving a decent amount of privacy and keeping the inmates ‘feeling like they are still people’.” In my opinion, the differences in the way the prisoners are being treated in each system is the cause of the recidivism rates in both of these countries. Since Norway still treats their prisoners as humans and gives them valuable life lessons and jobs that they can work when they are released, the prisoners have a better chance of surviving on the outside and not relapsing into their life of crime. Whereas on the alternative side, the U.S. treats their prisoners like caged animals, giving them no room for privacy, no adequate meals, and no life lessons or jobs that they can do when they are released, leaving them to fend on their own in the outside world, which in turn, causes their relapse into the life of a criminal sending them back into the system.

The following photo’s were added by Jerry Nix 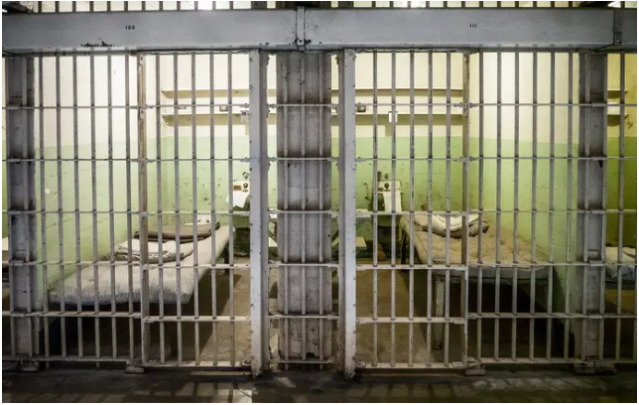 And here’s a look at a prison cell in El Reno, Oklahoma:

Now compare these cells with cells located in prisons in Norway …

Notice the privacy the prisoners are afforded in their cells?  Now back to my Granddaughters paper …

Back to the paper …

Now that one can see the major differences in Norway and the United States’ prison systems, one must also understand that we simply can’t “copy” their system. “We cannot simply say that we as a people can trust that this system works for everyone just because it works in another society.” There are two major factors preventing the complete use of their system here in the U.S. The first factor is that we have a significantly higher population than that of Norway. In turn, this causes our incarceration rate to also be higher meaning we have more prisoners to pay for forcing the U.S. to take the “cheaper” route in order to provide for them all. One way that we can change this is to “lower the amount of people incarcerated for non-violent or minor drug related crimes.” By doing this, there would be less people taking up space in our prisons, and less people that our system has to provide for. I am not suggesting that we stop arrested people for non-violent or minor drug related crimes, but instead of incarcerating them we should use other alternative punishments such as community service, monetary fines, etc. to keep our incarceration rate low allowing us to spend more money on the violent offenders that are in prison. The second factor preventing us from using Norway’s system is that they are a social welfare country. This means that “the state levies high taxes from a mostly rich population”, allowing Norway to afford to be able to run their prisons the way they do.

Instead of trying to copy Norway’s system we should simply just adopt some of their methods that are attainable here in the U.S. For example, understandably, we cannot afford to house all our prisoners in “dorm-like” cells. However, what we can do is allow more yard time and maybe add a barred window on the roof to allow the prisoner to see more of the outside world. Another thing I believe we should incorporate is jobs such as gardening or cooking (real meals) that could help them survive when they are released from prison. Norway, before releasing their prisoners, finds them a job on the outside to work. This would be a beneficial addition to the United States’ system because it is not an easy task to find a job as a convicted felon. Therefore, when they are unable to find jobs that commit crimes to survive and get put back into the system causing the incarceration rate to either stay the same or rise. Lastly, I believe that we should incorporate Norway’s idea to teach inmates how to use technology so they are more prepared and qualified for the outside world, as this is a big shock for people who have been in prison during the technological changes that have happened worldwide. By incorporating the good, attainable parts of Norway’s system; the U.S. will be changing their system for the better, hopefully resulting in lower recidivism rates and in turn less incarceration rates allowing the money spent on prisoners to be adequate enough to provide for their needs.

7 thoughts on “Comparing Norway’s Prison System to the U. S. By: Guest Writer – Kylie Nix”