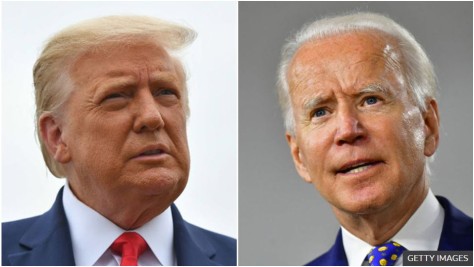 I have looked at thirty, 4-year periods from 1901 through January 20, 2021 at 12:00 PM Eastern Time and this is what I found (and you can see these numbers at the bottom of the table below).  Of Course the last period that starts today for Mr. Biden’s presidency is not included in this table other than being mentioned with a starting value.

Over 30 of these 4-year periods we had 23 periods that showed a rising stock market and only 7 periods that showed a declining stock market.  If you simply divide 23 by 30 you will find that the Dow Jones Industrial Average (DJIA) increased 76.67% of the time.  I used the DJIA because history of this index is readily available on the internet and it dates back to 1890.  I’ve always told clients the market would increase in value 75% to 80% of the time and this goes to prove that I am right.  Why anyone would sell it short I have no idea.

I’d say this is pretty even.  You can see this table here: 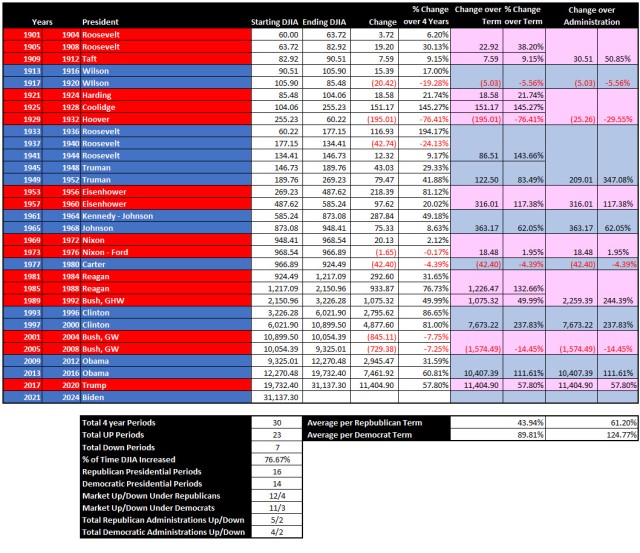 On the republican side:  Coolidge, Eisenhower, Reagan and Trump had some great years while Hoover and the younger Bush did not fare so well.  On the democratic side:  Franklin Roosevelt, Clinton and Obama had some very good years while Wilson and Carter only suffered minor losses.

So, you may be thinking … “Why is it then, that even though the number of wins and losses is pretty equal, but in terms of average returns the Democrats seem to do much better than their Republican counterparts?”  The only thing I can come up with is Money Being Spent.  Historically, though not always, it seems that Democratic Administrations seem to spend more freely than republican administrations (and income taxes are usually higher).  Of  course that was not so under Carter or Trump.  It was actually reversed.  Carter did not have much to spend (and taxes were outrageously high) and Trump was more – so concerned with “Putting America First” – that he did not mind spending money that much (and actually lowered taxes).

How will we fair in the market under the Biden Administration?  If he is like most other Democratic Presidents he will spend money and the market should go up double or even triple digits over the next 4 years (as well as individual and corporate income taxes) — only time will tell.

Now that you know the numbers … this is what you HAVE TO KEEP IN MIND!

The presidents of the United States, while they may influence market direction to some degree, they really don’t control the markets.  The market is going to do what it is going to do and it is driven, in large part, by the amount of money being spent or the amount of money not being spent.  Money is spent when “people are greedy” and money is not spent when “people are fearful.”

It really does not get much simpler than that.